Lettering Styles
I primarily use the Italic hand (see sample "Mr Shifflett & Ms Atkins" without drop shadow), as it is what most people equate with "Calligraphy."  If you have a special hand, or font, that you would like me to duplicate, feel free to ask and I will do some samples for you.

I have included on this page some pointers on how to address your invitations, but I am happy to help you with etiquette if needed.
I recommend
Crane's Wedding Blue Book
and use it frequently!

Pricing
Based on Italic, black ink on acceptable paper/envelopes, lettering only. Additional fees for assembling invitations, colored inks,
specialty hands, lined envelopes, shipping or pickup and delivery (where feasible).  On envelopes, prices include 3 lines on front and up to 2 on inner.

Quotes avg $1 per short line, with an additional minimum set up fee of $45, plus materials if not provided.  Artwork additional, and varies depending on the complexity.

Certificate fill-ins... $15 for first, $8 each additional

Please feel free to contact me for a no obligation quote...
Michele@sommersend.com 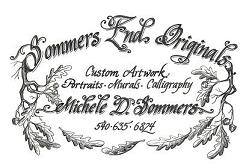 I have been practicing Calligraphy for over 20 years.  I would be happy to create something hand lettered for that special occasion, which lends elegance and sophistication to any event. 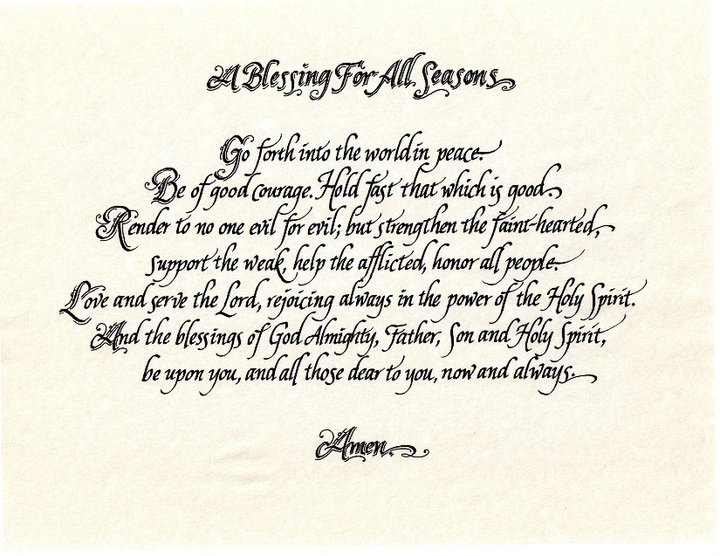 Reasons He Loves Her...

This is a list of reasons a Gentleman wrote for his wife, who was always asking, "Why do you love me?"  She had 3 loves that he wanted incorporated as well.. German Shepherds, red roses and dragonflies.  An odd assortment to be sure, but it's all in there! 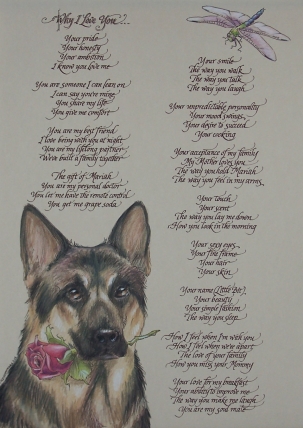 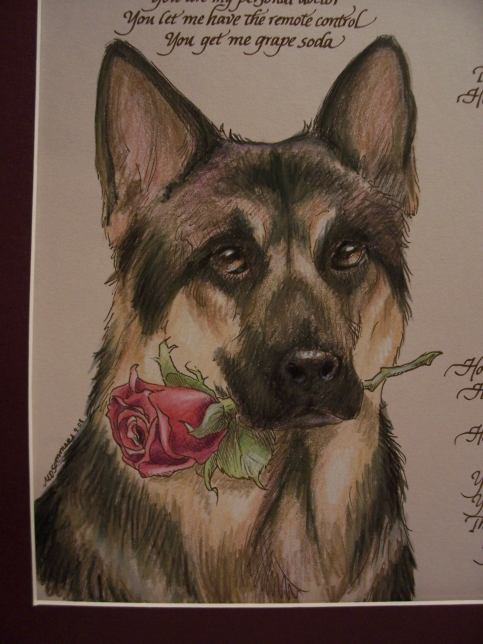 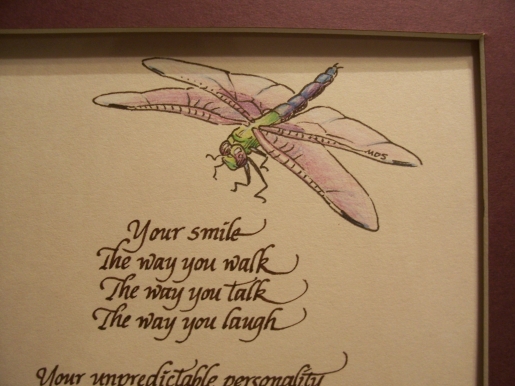 I can also letter directly onto a wall with paint, for that very special touch.  Here are some of my calligraphy "murals": 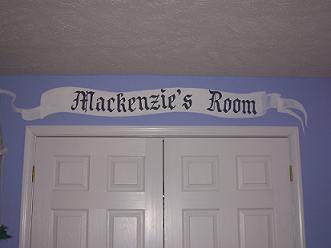 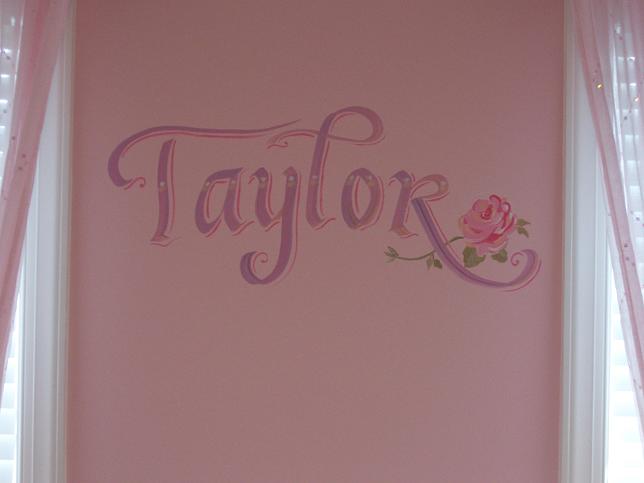 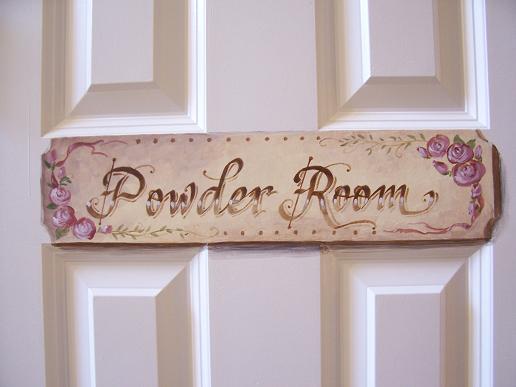 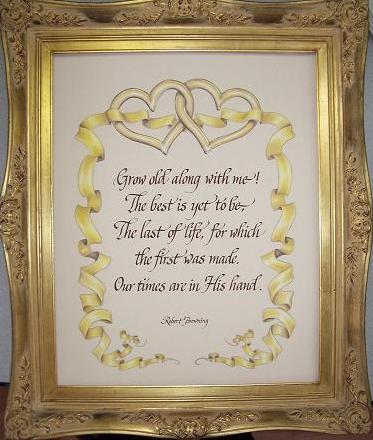 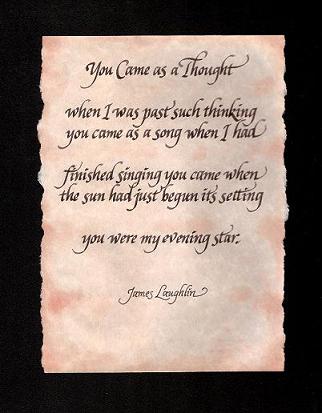 I was commissioned to add a line to a Papal wedding blessing... the last line was added.  This project was a challenge as the paper would not accept my ink, so I basically drew the letters one by one- even over the raised seal.

This is lettered for an inner envelope in a basic Italic hand.

Here is the same envelope with a "drop shadow" for a little added flair.

This piece was done in an italic hand, with a little more flourish, and then the paper was torn and "aged" with brown ink to give it the appearance of an ancient scroll.

When you arrange your names and addresses for me, I prefer them to be in the following format:

Some Guidelines for Addressing Envelopes:

The following are suggestions on how to address an envelope for a formal wedding invitation.  These are only suggestions; ultimately, you are the one that can choose how you want your envelopes addressed.  We are simply giving you the information for you to use as you choose.  With this in mind, please make sure that your list is exactly the way you want it to be written.

The first line of the address is the title line where the guest name appears.  Formal first names should always be used (i.e. Thomas as opposed to Tom).

A second title line may be used for another guest name; otherwise it contains the street address or post office box.

Abbreviations should be avoided.  The words Post Office Box, Street, Avenue, Drive, etc. and East, West, North and South should be spelled out as well as the name of the city and state.  Single digit street numbers should be spelled out (i.e. One, Two, Three... etc.).  Street Names that are numbers can be written two ways - 94 East 4th Street or 94 East Fourth Street.  Unless your envelopes are unusually large, it is a good idea to not exceed 5 lines in your address as they tend to start looking a bit messy with any additional lines.

TITLES
Everyone has a title. In the case of such titles as Mr., Mrs., Ms., and Dr., abbreviations can and should be used. Use Mr., Mrs., and Ms. accordingly. In the case of judges (Honorable),  the clergy (Reverend, Rabbi, etc.),  political figures (Governor, Mayor, etc.), and those in the military (Lieutenant, General, etc.), we strongly suggest using the full title but abbreviations are also accepted for these (Sen. John Doe, Hon. John Doe, Prof. John Doe, and Brig. Gen. John Doe).

Always spell out Reverend and Honorable when preceded by "The" as in The Reverend John Doe or The Reverend Father John Doe.  Abbreviate Rev. and Hon. when used with a persons FULL name as Hon. John Doe. Never use The Rev. Doe or Rev. Doe.  Spell out Rabbi as in Rabbi David Mark Feldman.  The inside envelopes may be less formal by using Father John or Rabbi Feldman.

When both husband and wife are identically degreed, use Drs. John and Jane Doe or The Doctors Doe.  In the case of a married couple and the wife is a doctor the title should read Dr. Jane Doe and Mr. John Doe.  If the husband is the doctor, the correct title would be Dr. and Mrs. John Doe.
In a dual title, use Reverend Dr. John Doe or Rev. Dr. John Doe or Rev. Dr. Doe.  On the inside envelope, use only Reverend Doe, omitting the Dr. title.

A final word on Titles, if you are having an informal affair it is perfectly acceptable to omit the titles all together and just use first names, such as John and Jane Doe.  This little tidbit of advice appeared in Martha Stewarts "Weddings" magazine so, depending if Martha Stewart is your 'cup-of-tea' or not, it is entirely up to you which method you prefer.

UNMARRIED COUPLES LIVING TOGETHER
Unmarried couples, living together can be written as Ms. Jane Doe and Mr. John Smith on one line. Or, the "and" may be omitted by placing the second name on a separate line.  The person with the closest relationship to the sender should appear first.  If both persons have an equal relationship to the sender the names should be placed alphabetically by last name.

Names of children should appear in the order of their ages, the oldest first. Children of guests that are eighteen years of age or older should receive separately addressed invitations.

SINGLES / WIDOWED/ DIVORCED
In the case of single females, a good rule of thumb is to use Miss for those under the age of 18 and they have never been married.  Use Ms. for those who are 18 or over or are divorced or separated.

Mrs. is used for those who are widowed, you may use their own first name or their husbands first name along with her married last name, but the best rule of thumb is to try and use what the individual prefers to be called.  In some circles it is preferable for a widow to use her maiden name in place of her first name and then her married name as in Mrs. Smith Doe.

In the case of those who are divorced use their own first name, not the former husband's first name even though they retain their married last name, such as Mrs. Jane Doe or Ms. Jane Doe.

You may wish to extend an invitation to a single guest to bring a guest of their own. Whether you choose to or not is entirely up to you, but outside envelopes should not say "and Guest".  This should be printed on the inside envelope.  Should no inside envelope be used, and you know that a particular single guest would like to bring someone; it is advisable to take the time to find out the guest's name.

SINGLES
In the case of a single person where you are inviting them to bring a guest, the inside envelope may say "Mary Jane and Guest (or Escort)" or "Miss (or Ms.) Smith and Guest (or Escort)". If you know the name of the person's guest, it is nicer to use that, it makes people feel more welcome to see their name in print.  Two single persons that reside together should be addressed "James Jones and Jane Smith" or "James and Jane", the person with the closest relationship to the sender should appear first.  If both persons have an equal relationship to the sender the names should be placed alphabetically.

NO INSIDE ENVELOPE USED

Four to six weeks before the event (not the RSVP date) is the general rule for mailing your invitations to ensure your guests receive their invitations and are able to respond with sufficient time. If you have guests traveling from out of town or if a holiday falls in between the mailing date and your event date, invitations should be mailed 6-8 weeks prior.  The RSVP date should be one or two weeks prior to when you must notify your caterer of a head count.

Prior to shipping all of your invitations, consider putting a complete assembly together and having it weighed and sized at the post office to determine proper postage.  Do not forget to place a stamp on the Response Card envelope before sealing the outer envelope.  Most irregular (perfect square, etc) or large size invitations require extra postage, as well as invitations being sent out of the country.  It is best to check with your postal service to determine the correct charges before mailing. It is terribly frustrating and costly to have a beautifully addressed invitation returned to you just because it did not have the correct postage.

(The above information on etiquette was found on several websites, so I am unsure who wrote it originally to ask permission to use it here.  If you are the originator, please contact me!  Thank you.)

All Content provided by Michele Sommers, copyright protected.
Please ask artist for permission to use images.  You may contact her at michele@sommersend.com
Thank you for your interest!